The Canadian Coast Guard Auxiliary (CCGA) is a nonprofit organization and a registered charity made up of volunteer resources throughout Canada. The CCGA has been in existence since 1978 and provides assistance to the Coast Guard and the National Defense with search and rescue and safe boating programs.​
Yellowknife Marine Rescue Unit

​In July of 1982 a fatal boating accident involving a float plane and a sailboat in Yellowknife Bay led to the creation of a volunteer marine search and rescue unit. This small organization became the Yellowknife Marine Rescue Unit of the Canadian Coast Guard Auxiliary, in 1992. One of the unit’s search and rescue vessels, Nick Martin, is named for the victim of this accident.

Our newest vessel, Rescue 797, was commissioned on July 20, 2021. Rescue 797 is on the water today thanks to the funding support of the Fisheries and Oceans Canada Indigenous Community Boats Program and fundraising efforts of the Yellowknife Marine Rescue Society. This was made possible as the result of community support from Chief Sangris and Chief Betsina of the Yellowknife Dene First Nation, Chief Marlow of the Lutsel K’e Dene First Nation, and Mayor Alty of the City of Yellowknife, and Wayne Spencer of the Canadian Coast Guard Auxillary Central and Arctic Region.

Yellowknife has always been, and continues to be an active port. The revitalization of the Commercial Fishery and recreational boating  being such a popular pastime contribute to this. The number and size of recreational vessels in Yellowknife has increased substantially in the last ten years. Although there are no official counts, the city’s two yacht clubs reflect sizable memberships and a simple poll among your friends will reveal many active fishermen, sailors, kayaks, canoeists, paddle boarders and recreational boaters
Who We Are
​Crewed entirely by a growing force of over 40 volunteers, the Yellowknife Marine Rescue Unit operates as first responder to marine search and rescue emergencies on Great Slave Lake and is tasked with all water-based search and rescue for the northern half of the lake. During an average summer, for example, Yellowknife Marine Rescue attends approximately 12 incidents, most without serious casualty.

The Yellowknife Marine Rescue Unit is particularly proud of its ongoing volunteer training. We work very hard to prepare our volunteers for their responsibilities and we are fortunate to have a number of members who are Transport Canada recognized instructors. Almost all of our training is done within the Unit, with volunteers attending weekly “dry land” training From January to May and weekly “on the water” training sessions on the boats in the summer. Considering the commitment required, we continue to retain a substantial number of dedicated members from year to year.

The Yellowknife Marine Rescue Unit is a Community Unit of the Canadian Coast Guard Auxiliary - Central and Arctic Region, under the Arctic District. The Arctic District is a fast-growing District with Units throughout the Northwest Territories, Nunavut and Northern Manitoba. We are fortunate to have close working relationships with our SAR Partners: the RCMP, Department of Fisheries and Oceans and the Canadian Coast Guard, to name a few. 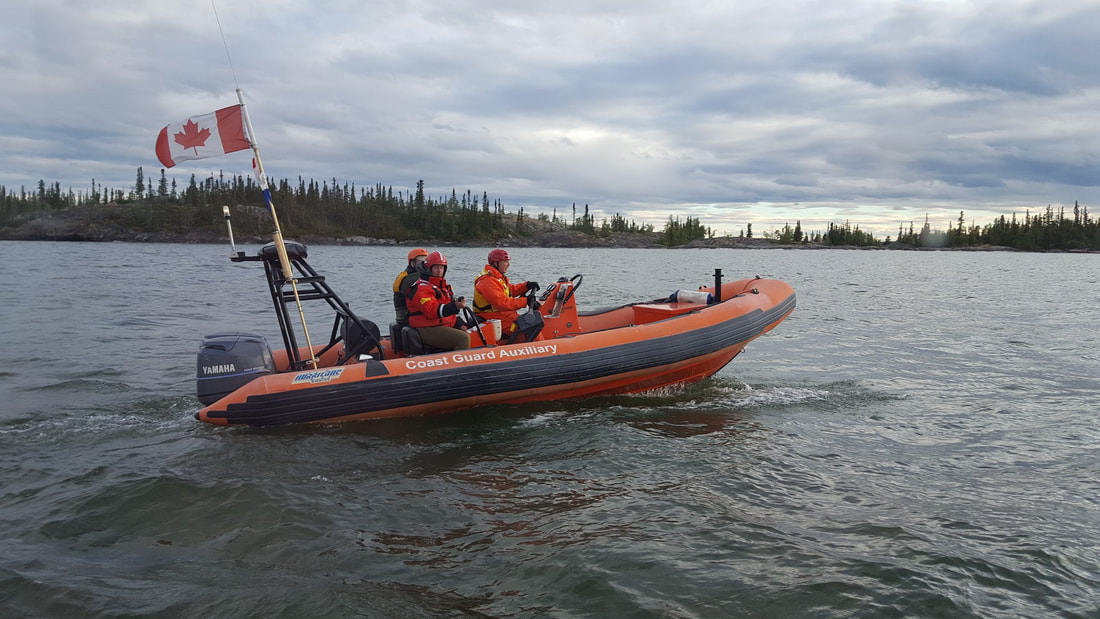